IS YOUR LAW FIRM READY FOR THE NEXT RECESSION?

IS YOUR LAW FIRM READY FOR THE NEXT RECESSION?

Of global expansions, history has taught us that we are heading towards our next recession. In fact, we are currently in the second largest expansion the modern world has experienced, lasting for nearly a decade now. On average, economy booms last no longer than 4.9 years. Following the end of the recession in 2009, America and other parts of the world have been experiencing steady economic growth.

Last year, two global economy experts predicted that the upcoming recession will hit us no later than 2020 and to complicate things further, it will be definitely worse than what went down in 2008. If they are right, then the upcoming recession can be compared with the 1929-1939 economic crisis, and we all know how severe the Great Depression was. The world is currently in debt of over 247 trillion dollars and according to the economic commentator Schiff, ‘in a much worse position than we were a decade ago.’

So, what does this mean for the legal providers you may ask?

According to Janet Stanton,  partner at Adam Smith, most law firms are taking no actions when it comes to preparing for the recession. She comments that this is because law firms tend to think not for the long term, but for the near future and this affects their investments planning.

In order to understand how the future recession is likely to pan out, it seems prudent to analyze how law firms were affected in the past.

In a single glance, there are no obvious differences that can be noted, between the pre-2008 legal practice tradition and the one currently in place. In other words, the concepts of law firm partnerships, billable hours, huge bonuses for associates, increased profits per partners, etc are all still in place, and being followed by in-house legal teams as well.

One of the most significant changes that occurred during and post the Great Depression is that the huge corporate clients stopped putting all their eggs in one basket. Instead of entrusting a single firm with a matter, they started assigning various portions of the matter to different practices, thus protecting themselves from severe losses.

During the period of 2009-10, there were several noteworthy mergers and acquisitions including the merger of the Washington DC firm Hogan & Hartson with the UK based Lovells. This merger is highly regarded as the second largest one of all time. Other significant mergers that occurred at this time included the acquisition of McKee Nelson by McCutchen.

The recession ended, mid-2009 and things started looking up for the global economy in general. Thomson Reuters has correctly pointed out that the traditional law firm franchise is slowly but surely eroding. Since 2010, the demand for law firms has remained rather low, despite which the legal spend has been increasing.

Taking a look at all the law firms that had to close shop owing to the recession, we came up with a list that is quite frankly worrisome. According to this article by Business Insider, among the firms that suffered the most, San Francisco based Heller Ehrman stands out. With over 700 attorneys in 2009, this firm had been heading towards decline for the past two years given their unusual financial structure wherein the earnings of the firm would be spent only during the end of the year (such that the number of taxes to be paid were less).

Philadelphia based Wolf Block that specialized in real estate cases faced an ultimate decline in 2009 when their plans for merger failed.

As per data collected from the U.S. Bureau of Labour Statistics, in the past decade, employment still has not been able to catch up with the previous figure of approximately 1.2 million jobs prior to the recession.

Among the countries that were most affected by the financial crisis were Russia, Argentina, Ireland, the United States, and the United Kingdom.

In the US, California was the most affected state with over 2 million unemployed, followed by Florida, Texas and New York.

By spreading out their investments, Paul, Weiss, Rifkind, Wharton & Garrison express confidence in having emerged stronger since the previous recession and their preparation for the upcoming recession. Their investments are focussed on litigation, regulatory work, private equity transactions and so on.

The decade following the Great Depression has not been uneventful for the legal world and some of the notable events include:

1. The emergence of new providers and skillsets indicating that the law business has branched out of exclusive legal practice.
2. Adapting to new technology as well as digital transformation.
3. Power transfer from the providers to the clients.
4. Legal technological investment.

The ‘Dynamic Law Firms’ study released by the Thomson Reuters Legal Executive Institute in 2017 was a comprehensive financial analysis of various firms in the legal market. Factors such as the billable hours, revenue generated per lawyer as well as the overall profit were studied. As a part of this study, the law firms were scored and segregated based on the resultant ranking. The firms ranking on the top quartile were called ‘Dynamic Firms’ whereas the ones listed at the bottom were referred to as ‘Static Firms’.

This study provided answers to our question: What can law firms do to survive the upcoming recession? This is done by analyzing and learning from the practice of successful law firms.

The conclusions drawn from this study indicated that the number of employees in a firm did not affect the growth in the share market, but that the focus should be on improving the per-attorney-productivity.

Furthermore, the dynamic law firms did not offer as many client discounts as the static ones did, highlighting the importance of quality of the service provided.

From this study, and by observing trends, we can draw the following conclusions such that law firms can be prepared for the upcoming recession.

• Every law firm, small or big, must be ready and able to adapt by making changes in investments, allocation of resources and so on, in order to survive the recession.

• The law firms must not compromise on their prices. Rather, the quality of the services provided must rise significantly such that it can match up to the prices quoted.

• Task allocation needs to be revised such that tedious, bulk work that do not actually need time spent by attorneys should be offloaded. Ideally, the tasks must be re-evaluated so that they can be deemed worth expert attorney time or not.

• Attorneys need to work on improving the quality of the services that are deemed worth their expertise, thereby uplifting the overall quality of legal expertise of the firm.

• Incorporating technology into legal practice has become quintessential. By increasing access of attorneys to tools aiding in the automation of processes, law firms save plenty of time. By providing clear, constant and accurate reports, technology aids lawyers in their decision making. The law firms are able to definitively analyze what is working for them and what is not.

Using technology will inevitably improve the attorney-client relationship as the entire practice becomes more transparent. Investing in good, trustworthy technology in different areas of the legal practice, along with a re-evaluation of current issues such as losses of billable hours, budget accuracy and monitoring, ensuring that all expenses are properly accounted for and recharged to clients in a timely fashion and more such changes are the best ways by which law firms can stay prepared for the upcoming recession.

ABOUT ALB: Accurate Legal Billing is a cloud-based software using which firms can prepare and submit error-free invoices that are 100% compliant with clients' billing guidelines. To know more, and to schedule a demonstration, please visit: www.accuratelegalbilling.com 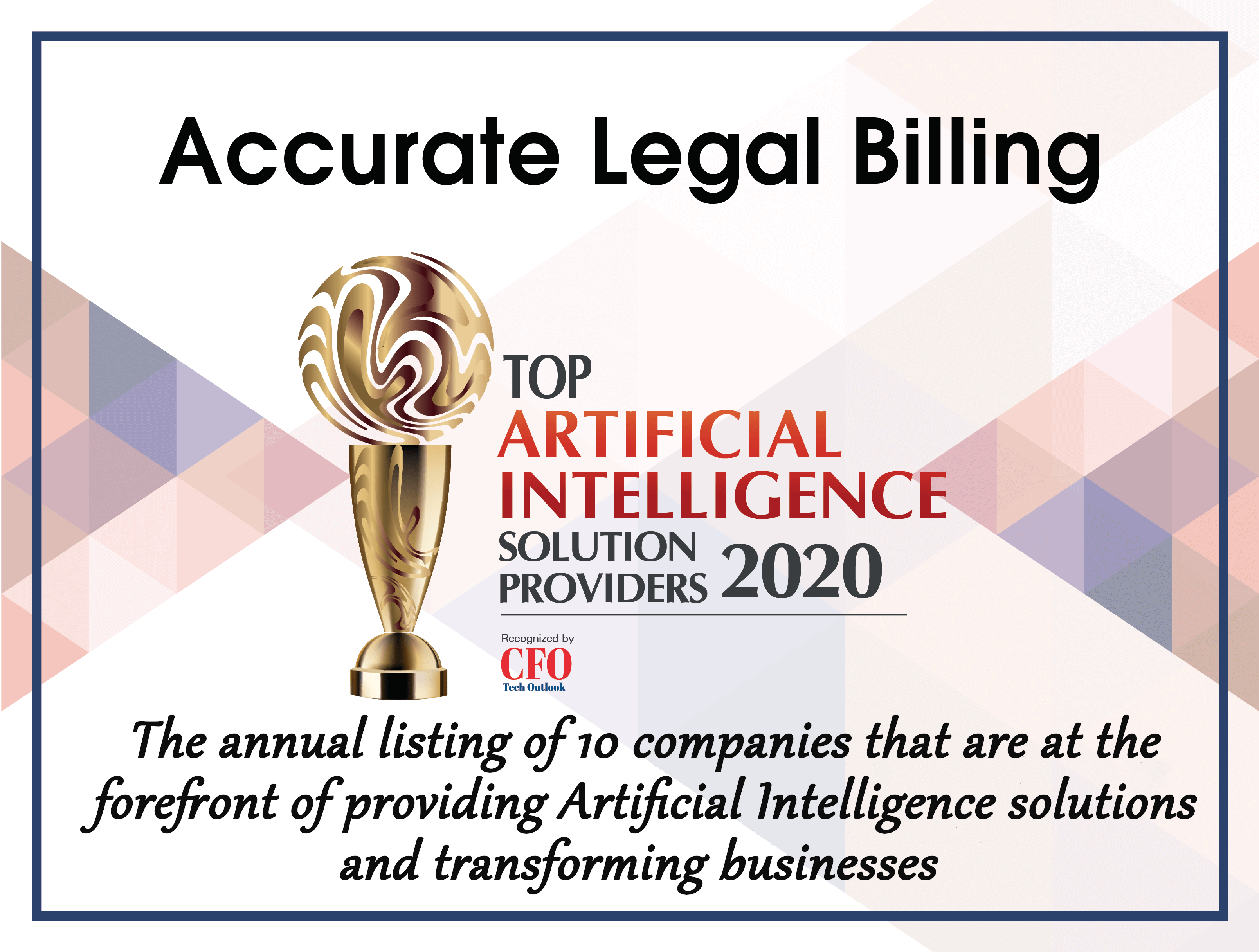 The invoice sent to us 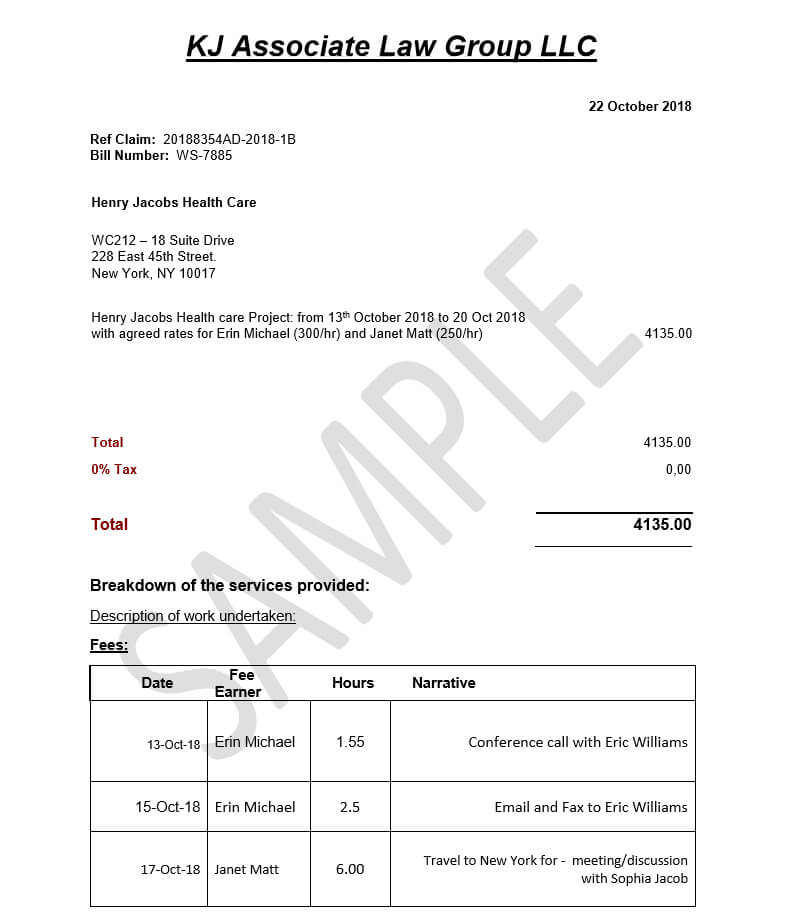 The invoice after revision